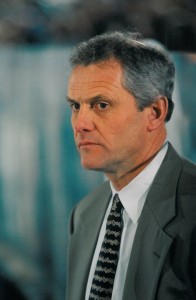 Brian McCutcheon
Brian McCutcheon became the Chill’s third coach and guided the franchise to its first divisional title in his only season in Columbus (1996-97) and was named East Coast Hockey League Coach-of-the-Year as he calmly led the team to a 44-21-5 record.
It was also the city’s first pro hockey title dating back to the inception of the Columbus Checkers (IHL) in 1966.
Championships were nothing new for Brian, who holds the distinction of being the captain of the NCAA’s only undefeated national championship hockey team in 1970. He was inducted into the Cornell Sports Hall of Fame in 1986.
In 1971 McCutcheon signed a pro contract with the Detroit Red Wings and he “winged” it from there. During his 12-year career among the teams he played for were the Tidewater Wings, Fort Worth Wings, Port Huron Wings, Virginia Red Wings and he finished with the Kansas City Red Wings in 1978.
Fortunately, he also made it the NHL, playing 37 games over three seasons for the Detroit Red Wings where he had three goals and an assist.
After his playing days ended, he started his coaching career at Elmira College, first as an assistant for one season then the head coach for three beginning in 1984.
He returned to his alma mater as head coach before leaving Cornell after six seasons and landing a one-year gig with the Los Angeles Ice Dogs (IHL) prior to taking the job in Columbus.
Following his successful stay in Columbus, he accepted a position in the Buffalo Sabres’ organization as head coach of their AHL affiliate in Rochester. He guided the Americans to a record of 128-82-9 from 1997 to 2000, twice leading the Americans to the Calder Cup finals. He was runner-up as AHL Coach-of-the-Year in 1999 and 2000.
He was then promoted to assistant and later associate coach to head coach Lindy Ruff with the Sabres. He would spend 11 seasons with Ruff in Buffalo, the last being 2010-11. Today he is coaching in Italy.
McCutcheon was born Aug. 3, 1949.