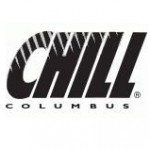 The team name, suggested by Amy Karpick and Gigi Kruza, the wife of Chill marketing director Alan Karpick and the fiancé and future spouse of corporate sales director Larry Lane, could have been considered soft or trendy.  That was a concern, but in the end the Chill front office found it to be the right choice to match the silver and black color scheme, easily rolled from the tongue and suggested winter sports.
Paitson even considered naming the team the Knights of Columbus or the Lizard Kings – a tribute to rock star Jim Morrison – to stand out all the more.  The team did play with the theme, later rolling out Lizard King branded merchandise for a short period of time. When Lane was promoted to General Manager of the Horn Chen owned ECHL Jacksonville franchise he named the team Lizard Kings.