The Columbus Checkers became the first professional hockey team in Columbus playing at the Ohio Expo Fairgrounds Coliseum. The Checkers, owned by the Schmeltzer brothers (Jerry, Ray and Larry), were part of the now defunct International Hockey League (IHL).
Their first game was an exhibition on October 12, 1966 against the Chicago Blackhawks, featuring future NHL Hall-of-Famers Bobby Hull and Stan Mikita. The game was almost cancelled due to poor ice conditions at the Coliseum. Hull and Mikita, citing safety reasons, initially threatened not to play, but ultimately relented playing just one period. It was a rather inauspicious way to introduce professional hockey to Columbus. The rocky start foreshadowed the franchise’s future instability.
The Checkers were led by player/coach Moe Bartoli who led the team in scoring the inaugural season and forward Bert Fizzell. Fizzell established team records for goals (153), assists (245) and points (398) during his four seasons with the team.
Under Bartoli, the Checkers finished in last place with a 23-48-1 record during its inaugural season, but rebounded with a third place finish (32-30-10, 74 pts) in 1967-68, earning their first playoff berth. However, after a rift with ownership, Bartoli left the franchise.
Jack Turner took over as the team’s player/coach at the start of the 1968 season as Bartoli focused solely on playing. Under Turner, Columbus failed to make the playoffs finishing sixth place (26-37-9, 61 pts) in 1968-69 and last place in1969-70 (24-36-12, 60 pts).
The Columbus Checkers folded in the spring of 1970 due to low attendance. 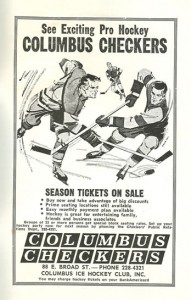 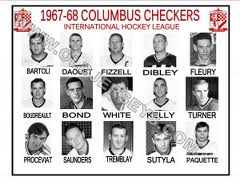