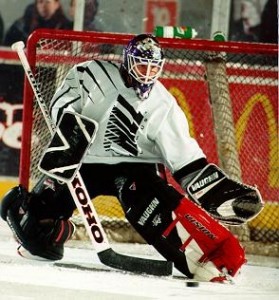 Jeff Salajko (1996-99):  “Sal” played 126 games over three seasons and was 74-37-11 with five shutouts. .. In 1996-97 he was 35-14-4 in helping the Chill become the first Columbus pro hockey team to win a division title… Outstanding in the playoff series vs. the Toledo Storm… Also had three assists and 40 penalty minutes in Chill career… In his post playing career, Salajko has been the goaltender coach for the Detroit Red Wings since May 2016. He previously spent three seasons with the Red Wings’ American Hockey League affiliate as the goaltending development coach for the Grand Rapids Griffins. “Sal” was an assistant coach for the Ohio State men’s hockey team from 2008-11 before joining the Ohio AAA Blue Jackets for one season. He was the goalie coach for the Ohio State women’s team for a season prior to his Grand Rapids stint.