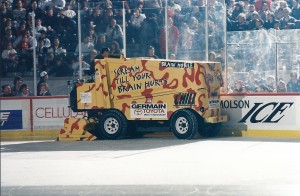 The Chill was owned by Chicago businessman Horn Chen. Chen is a Chicago-based businessman and minor league sports entrepreneur.
As a lifelong Chicago sports fan and owner of Sluggers Sports Bar located directly across from Wrigley Field, Chen became intrigued with sports ownership in the late 1980s.
After initially inquiring about the possibility of purchasing the Chicago Blackhawks, he soon realized that major league sports ownership was out of his financial reach. Instead, in 1988 he began to explore minor hockey and was convinced that the timing was right for a resurgence of interest in the sport.
Years earlier, Chen became intrigued with Indianapolis after traveling with his son Chris on numerous youth hockey trips to Carmel, Indiana (a suburb of Indianapolis) and became familiar with the city.
Chen purchased the rights to the Indianapolis market and he, President Ray Compton and Marketing Director David Paitson successfully launched the International Hockey League (IHL) Indianapolis Ice in 1988-89. It became the first hockey franchise in city history to turn a profit and won the Turner Cup in its second season. It would be the first of Chen’s numerous sports ventures.
His second venture was the ECHL Louisville Icehawks who began play in 1990.
In the spring of 1991, Chen purchased the 16th and (what was to be the) final franchise in the East Coast Hockey League (ECHL).
Chen had his sights on a new 10,000-plus seat arena at Cleveland State University, a city with strong hockey roots including a period with the NHL’s Barons in the late 1970’s.
However, it became apparent in meetings with CSU officials that there was no plan for an ice plant as part of its new facility. Making matters worse, they were still searching for a building general manager and there was a void of anybody at the university that could make a deal, especially in the short time-frame, as Chen intended to launch the franchise for the 1991-92 ECHL season.
Chen had promoted David Paitson to the leadership position of the new ECHL franchise and after investigating alternatives Paitson convinced Chen that Columbus was the right market.
Columbus proved to be the right market indeed setting minor league attendance records and generating annual profits.
After eight successful seasons in Columbus, Paitson brokered a deal between Chen and McConnell paving the way for the Chill’s official exit and in so doing secured a minority ownership stake in the NHL Columbus Blue Jackets.
Chen is the founder and owner of the Chiller Dublin (1993) and later partnered with McConnell on the building of Chiller Easton (1997). Chen still enjoys an ownership stake in the Chillers.
Chen would later sell the Chill to SMG. The franchise exists today as the Reading Royals.
Chen has also been the owner of several minor league teams over a variety of sports, including ice hockey, baseball and arena football. Chen is also the founder of the Central Hockey League, which began to play in 1992. He was also the owner of the Ottawa Rough Riders of the Canadian Football League.